Lifelong St Mirren fan John Pringle, who is a resident at Royal Blind care home Jenny’s Well, got the chance to meet Saints manager Jim Goodwin and players from the first team at the Saints ground today. 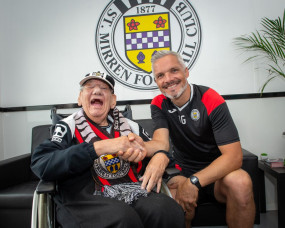 John Pringle’s family have a big history with the Saints, John’s uncle was Charlie Pringle who played for St Mirren in 1916 and signed for them in the First World War. Charlie Pringle went on to play for Manchester City.

John, aged 82, has lived at Jenny’s Well for two years. He has learning difficulties and is vision impaired. Care Assistant Karrie Reilly, also a St Mirren supporter, started taking John along to some games.

Karrie said: “He really enjoyed going to the games, I would take him in a taxi from Jenny’s Well and he just got so much out of it as he used to go when he was young with his family.”

But Karrie didn’t’ stop there, “I thought it would be a lovely thing for John to meet some of the players and the manager. He has been unwell recently and has been in hospital. I thought it might give him a bit of a boost.”

Karrie emailed the club and the Saints were only too pleased to help out.

St Mirren Manager Jim Goodwin said: “John is welcome here any time it’s been an absolute pleasure to have him here today."

John went onto the training ground and had his photo taken with the St Mirren first team and hero goalkeeper Vaclav Hladky who were just finishing a training session.

Saints CEO Tony Fitzpatrick also came to meet John, Tony said: “I’ve seen John at the matches and I’m so pleased that after his recent health problems we were able to invite him down to see us today. It is fascinating that his Uncle Charlie played for St Mirren. We have a photo of Charlie Pringle with the 1916 team in our hospitality suite at the stadium.”

John said: "It was lovely to come, I had a good time, and I said cheese for every photo.”

Footnote, November 2019. We are very sad that John passed away in November. He will be much missed by family, friends and staff at Jenny's Well. It was lovely that he managed to make the trip to St Mirren just before he died. And at the match on Saturday, the whole crowd started a round of applause for John at the begnning of the game, St Mirren scored just as the applause started which seemed like a fitting reminder of the love that both John and his family had for their local team.