Learning more about a diagnosis

Charles Bonnet syndrome (CBS) is a very common condition following sight loss yet is little talked of, and can often cause frightening symptoms.

Katrina Campbell, a Rehabilitation Officer with Sight Scotland Veterans, offers expert advice on the condition and how to cope.

Katrina says: "Many people find the symptoms frightening, and are wary of telling family and friends about it in case they assume it is a cognitive deterioration.

"CBS causes people who have lost a lot of vision to see things that aren't really there, known as visual hallucinations. This might be vivid repeating patterns, images detailing people, places, animals, etc. or even events. These hallucinations are visual and don't involve hearing things or any other sensations like smell.  Such hallucinations are not caused by a mental health problem or dementia."

Katrina says: "Although the hallucinations may not be of anything frightening, it’s natural to feel upset just by having the experience of a hallucination of something which isn’t real."

Veterans who have experienced such hallucinations after sight loss explain:

One veteran told us of experiencing seeing snakes swarming his living room floor, and as such feeling forced to keep his feet firmly on the sofa.

Katrina says: "The main cause of CBS is loss of vision and how your brain reacts to this loss. Research is slowly revealing more about how the eye and the brain work together. Current research seems to suggest that when you are seeing real things around you, the information received from your eyes actually stops the brain from creating its own pictures. When you lose your sight, however, your brain is not receiving as much information from your eyes as it used to.

"Your brain can fill in these gaps in visual information by releasing new fantasy pictures, patterns or old pictures that it has stored. When this occurs, you experience these images stored in your brain as hallucinations."

How to know if you have CBS

CBS tends to begin in the weeks and months following a deterioration in your sight however it can occur at any time. There isn't one test that your doctor can do to find out whether you have CBS or not. Usually by talking with you and in some cases doing tests, your doctor will be able to rule out the other causes of hallucinations.

Coping with the hallucinations

Katrina suggests some coping strategies that some people find can sometimes help in disrupting and stopping hallucinations:

Katrina says: "Though there is no cure for CBS, many people find the hallucinations settle down over time as their brain adjust to the vision loss. However, some people do continue to see hallucinations so letting people know that you have this problem or talking about it with others who have shared the experience should offer some peace of mind."

Seeking some support with a sight loss diagnosis? Contact our Family Support Line for friendly advice and support from Sight Scotland experts. Call 0800 024 8973. 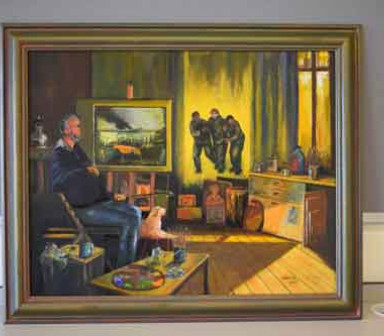