Charles Bonnet Syndrome is a common condition that can affect people of any age who have vision loss. The condition causes visual, silent hallucinations to occur as a result of sight loss. The hallucinations vary greatly from person to person, with some people seeing images of everyday items while others might experience worrying, even terrifying hallucinations.

The Esme’s Friends support group sessions allowed Marjorie to talk openly with other veterans with sight loss who have Charles Bonnet Syndrome for the first time.

Marjorie said: “Sight Scotland Veterans and Esme’s Umbrella are doing wonderful work with the Esme’s Friends support group because Charles Bonnet Syndrome is not the sort of thing you bring up in normal conversation. It surprised me just how much I learned from talking to the others.

“The hallucination I sometimes see is an old man. To begin with I was worried sick as to why I kept seeing it. Your mind’s searching for answers. One of the first times it happened I wondered why, when it was pouring with rain, this old man was walking along the road in his shirt sleeves. I couldn’t understand it. I saw him again somewhere else and remember thinking, ‘How’s that old bloke got there so quick?’

“The thing that had first struck me was not about his face, but what he was wearing. My grandfather always used to have his white shirt with no collar on with a black waistcoat and black trousers, and a pinafore because he was a gardener.

“It suddenly dawned on me that he wasn’t really there. I was frightened to speak to anybody about it because I didn’t know about Charles Bonnet Syndrome.

“I could be sitting on a moving bus and look out and see him walking among the people. In bed one night I looked up and he was just stood there looking at me. I didn’t like that at all. But it’s never frightened me.

“When I learned about Charles Bonnet Syndrome it really made a difference to me to know that I wasn’t going daft. I think the first time I really spoke about it was with my Sight Scotland Veterans Rehabilitation Officer.”

Marjorie believes there should be more public awareness about Charles Bonnet Syndrome.

Marjorie said: “Until the Esme’s Friends sessions I didn’t realise so many others were suffering with it and how it varies for each person. Everybody sees something different. We built up quite a camaraderie in the group. It was nice talking to people who had found ways of dealing with it.

“People don’t know about Charles Bonnet Syndrome. I think it should be publicised an awful lot more than it is.”

Find out more about Charles Bonnet Syndrome in our information and advice library. 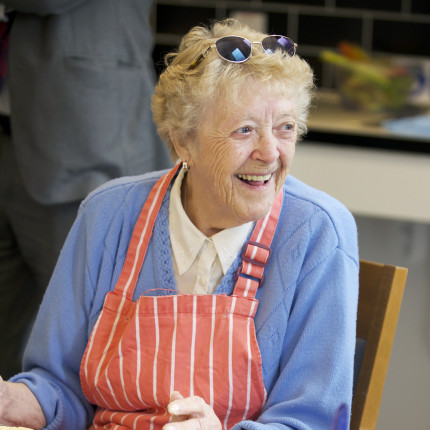