Scotland’s leading sight loss organisation, Sight Scotland and Sight Scotland Veterans, highlighted rail challenges to MSPs and members of the public in Edinburgh this week [20 April] as the charities call for accessible and affordable rail travel for visually impaired people.

MSPs and members of the public had the opportunity to use a rail ticket machine prop while wearing spectacles simulating different eye conditions at an awareness stall outside the Scottish Parliament.

Veterans with sight loss who attend Sight Scotland Veterans’ Hawkhead Centre in Paisley crafted a ticket machine prop to demonstrate the difficulties in using station ticket machines and being able to read screens and keypads for a person who has sight loss.

With ScotRail now in public ownership, the charities have launched a petition calling for the establishment of a new national rail travel policy for Scotland which would enable free rail travel across Scotland for any holder of a National (Scotland) Concessionary Travel for Blind Persons card and their companion.

Currently there are different concessionary and companion schemes for train travel for visually impaired passengers and their companions in different local authority areas. Sight Scotland and Sight Scotland Veterans have heard first-hand from blind and partially sighted people about the confusion they have experienced due to this lack of consistency across local authority areas in Scotland.

Joe Tottenham, 90, of Kirkcaldy, who is a veteran with sight loss supported by Sight Scotland Veterans, attended the stall to show his support for the campaign. Joe backs the call for a new national policy for rail travel like that of the free bus travel scheme.

Joe said: “My sight is more like shadows now. I always have to travel with someone in order to travel on the trains. A travel companion to provide support can be really important for someone with sight loss. You’ve got to manage getting from the platform onto the train, and coming off the train, it’s things like stepping back down onto the platform and not knowing where the buttons are for opening the doors. Some stations have different levels of platforms which is very hard to manage alone.

“With ScotRail now in public ownership, Sight Scotland and Sight Scotland Veterans are calling for all local authorities in Scotland to work with the Scottish Government to make local travel networks as accessible and affordable as possible for blind and partially sighted people and their companions.

“So many visually impaired people rely on the rail network to get around, and problems with accessibility create a real barrier to independent travel.

“Travelling with a companion can make a real difference for visually impaired people, providing support which is vital for many blind and partially sighted people to be able to use rail services safely and with confidence.

“A new national policy which would enable free rail travel across Scotland for any holder of a National (Scotland) Concessionary Travel for Blind Persons card and their companion would be a huge step forward for an inclusive Scotland.” 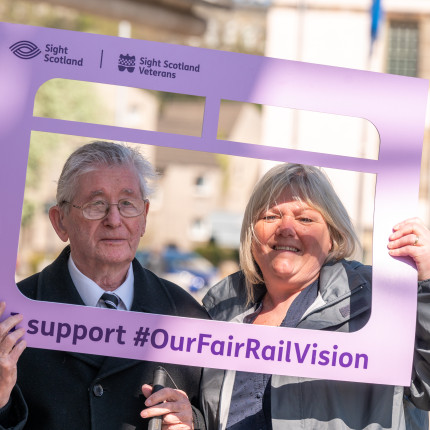