Andrew Pettigrew excelled in his studies at the Royal Blind School.

After seven years of schooling, Andrew is about to begin his studies at the University of Strathclyde.

The creative young man scored straight A’s for his Advanced Highers in English and his Scottish Highers in Biology, Politics, History, and Modern Studies.

Andrew, who is Registered Blind, said the school’s strongest assets were its teachers.

“The staff are brilliant and you get a lot of confidence from that.”

Andrew said that to his surprise, he found he enjoyed learning Biology and Maths too.

“My Biology teacher once demonstrated the structure of DNA by building strands and nucleotides out of sweets, making it tactile. It was a fantastic idea and definitely received my fullest attention!”

In Maths, Andrew wrote equations using braille numbers. His Maths tutor Keith would create models of mathematical concepts using cardboard and wire for Andrew to touch, helping him to understand the concepts.

More than an education

In addition to Latin and Andrew learned occupational and independent living skills in his last year at the Royal Blind School.

Playing Chess is another of Andrew’s passions.

“On Tuesdays, I used to play chess with the ICT teacher, Mr Levin. It was a Chess club, but no-one else was interested in playing,” he said.

While he attended the Royal Blind School, Andrew won the Pushkin Prize for young writers in 2016; he attended work experience at the Scottish Poetry Library in June 2019, and he spoke at the UK Eye Geneticists’ annual conference in November 2019 about his experience growing up with a vision impairment.

Focused on the future

At the University of Strathclyde, Andrew will be studying an English and Creating Writing course as part of a Bachelor of Arts degree, following his ambition to be a writer.

“I’ll be attending lectures in person. I was feeling a bit nervous but I’ve been in touch with the disability department at Strathclyde so it’s more a feeling of excitement now,” he said.

“I have been exploring the university’s intranet portal so I can familiarise myself with it before I visit.

“I’ve been looking at different formats for Powerpoint presentations and giving the lecturers feedback on the formats that will work for me, too.”

Andrew said he had many fond memories of the Royal Blind School, including the time he performed the role of Willy Wonka in a production of Charlie and the Chocolate Factory—one of six Christmas Plays he participated in.

“The Royal Blind School is all about what pupils can do, not what they can’t do. It’s empowering them and getting them to where they want to be,” Andrew said. 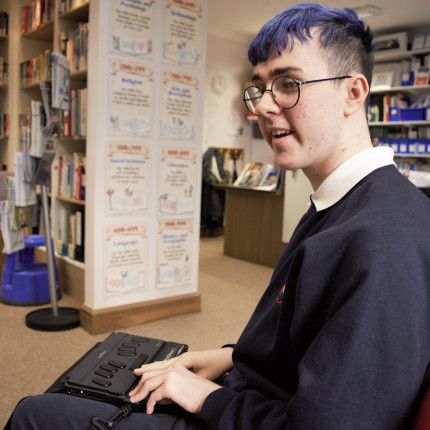