Charlie Burns, 83, was “shocked” to learn he has aged-related macular degeneration following an eye examination at his optician last year. With a long wait for an eye hospital appointment, Charlie’s daughter, Gail Burns, made huge efforts to find out further information about sight loss to support Charlie.

Gail reached out to Sight Scotland earlier this year (2021) through its new telephone support line, and both she and Charlie have been receiving support from the charity’s Family Wellbeing Service.

The Sight Scotland Support Line, which was launched in Edinburgh and the Lothians in January 2021 as part of its newly formed Family Wellbeing Service, launched nationally in September 2021, offers someone for people with sight loss and their families to turn to for information, advice and support.

Charlie said: “When I was told the news about my eyesight it was a right shock. At first, I couldn’t believe it. I thought it had just been my glasses. I’d never heard anything about macular degeneration before. It all happened very quickly. I can see the outline of people but I can’t see their faces, that’s the problem now.

“My sight loss has been a blow to me. Life’s changed enormously. I was quite an active man, and then all of a sudden you have to watch what you’re doing. It’s just annoying. I’ve got to come to terms with it.

“No one has ever said to me what to do next after my diagnosis or that I might be able to get support. Sight Scotland’s support has been brilliant. They have given us advice and ideas and things that I wouldn’t have thought about.

“Anita O’Reilly, one of the Sight Scotland community workers who has been supporting us, has been brilliant. She’s got a good nature, she’s a good listener and she’s very caring. Whether it’s magnifier options or finding social groups, she’s been very helpful.”

The new service launches nationally as Sight Scotland and Sight Scotland Veterans publish findings from their latest research involving over 200 visually impaired people. Over 55% of participants said they hadn’t had enough information about where they could find support after their diagnosis; while over 80% said it was important to provide more support to family members and carers.

Almost 90% said it was important they and their families received support to deal with the emotional impact of sight loss.

Charlie’s daughter, Gail Burns said: “When Dad was told he had macular degeneration it was quite a shock – I had never heard of it. I was really confused and it was quite scary. It was that realisation that something was seriously wrong.

“I don’t think Dad initially realised the severity of his condition. I did some research to find out more and felt quite down about it. It would have made a huge difference to have had support at an earlier stage after Dad’s diagnosis. The information that I came across was helpful but I also felt overwhelmed trying to work out the best route for Dad.

“I got in touch with Sight Scotland for my Dad and for me because I found it really difficult, and I still do sometimes. I think the main thing was the fact that he wouldn’t be able to see his family’s faces again properly. He’s been through so much. He’s found ways to adapt his approach with everyday tasks and I’m so impressed with his resilience and willingness to try different vision aids and equipment that Anita from Sight Scotland has introduced him to.

“It makes a huge difference that Sight Scotland understands completely what Dad’s going through. Anita has been an absolute godsend for me, I’ve had so many long chats with her on the phone. The emotional support that she’s provided has been invaluable.

“Now we’re in a much better place and I think Sight Scotland’s made a massive difference.”

People impacted by sight loss can call the Sight Scotland Support Line on 0800 024 8973, Monday to Friday from 9am – 5pm or visit our Support Line page for more information. 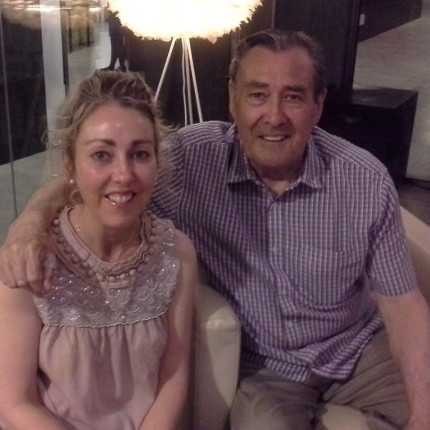