A vision impairment charity has welcomed a new Outreach Worker who will support veterans with sight loss across Fife.

Scottish War Blinded members in the region, who are all veterans living with a vision impairment, have been getting to know Stephen Greig over the last few weeks.

Stephen is one of 15 Scottish War Blinded outreach workers based across Scotland, who all provide free support to the charity’s members.

“I’m meeting lots of people with all types of stories,” Stephen said.

“I’m enjoying making a difference and having the tools and ability to make changes for the veterans I work with.” 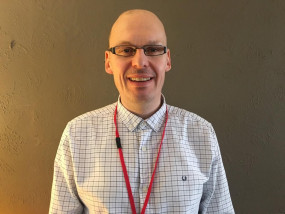 The aim is to enable each veteran to continue living as independently as possible, despite their sight condition.

Specialist equipment – from electronic magnifiers to kitchen aids –  is available to members, free of charge, as well as expert advice and support from the Scottish War Blinded rehabilitation officers.

And Stephen also runs two monthly lunch groups, one in Dunfermline and one in Kirkcaldy, giving the charity’s Fife members chance to meet fellow veterans for a friendly chat over a spot of lunch, provided free-of-charge.

The groups are on the lookout to increase their numbers – and Stephen is encouraging any veteran with sight loss in Fife to reach out to Scottish War Blinded for free support.

Stephen said: “The lunch groups are about getting to know people and building relationships with others who live in the same area. They are both very relaxed, and carers and partners of our veterans are also very welcome to come along.

“I’ve been visiting quite a few veterans who live on their own, and things like the lunch groups also make a difference to help them get out and make new connections.”

Research carried out by Scottish War Blinded last year showed that two thirds of Scottish War Blinded members said their sight loss had resulted in them experiencing loneliness, and access to the charity’s services played the greatest role in helping them overcome social isolation.

Rebecca Barr, Director of Scottish War Blinded, commented: “Our lunch groups are important social events for many Scottish War Blinded veterans across the country. We have seen many friendships flourish as a result of members being brought together at these monthly meet-ups.

“Our research has shown that too many of our members have experienced social isolation as a result of their sight loss, and access to the services we provide is crucial to help our veterans overcome loneliness or prevent them from becoming isolated.

“If you are a veteran with sight loss, or you are a relative, friend or carer of someone who is, we’d love to hear from you.”

Stephen’s Kirkcaldy lunch group meets on the first Monday of each month at The Waterfront Restaurant, High Street, Kirkcaldy, from 12pm until 2pm.

His Dunfermline lunch group meets on the first Friday of every month at Fire Station Creative, Carnegie Drive, Dunfermline, from 11am until 1pm.

For more information about the support offered to veterans with sight loss in Fife and to refer a veteran to the charity, call 0800 035 6409 or get in touch online at www.scottishwarblinded.org.