Charles Bonnet Syndrome (CBS) is a common condition that can affect people of any age who have vision loss. The condition causes visual, silent hallucinations to occur as a result of sight loss. The hallucinations vary greatly from person to person, with some people seeing images of everyday items while others might experience worrying, or even terrifying hallucinations.

After voicing her concerns to her GP, Dawn was recommended to see her optician who explained Charles Bonnet Syndrome and its effects to her.

Dawn says she personally doesn’t experience any hallucinations that she finds frightening, so she found an Esme’s Friends telephone support group, run by Sight Scotland Veterans and CBS campaign organisation Esme’s Umbrella, to be a good opportunity to reassure fellow veterans with sight loss with different experiences of CBS.

Dawn said: “The biggest thing for me was that I’d thought I was losing my mind and that definitely did affect me. I imagined it was dementia. It’s very difficult to find anyone who knows anything about Charles Bonnet Syndrome.

“For me, when it started it was like I was seeing everything through a hedge or wire netting. I was also seeing a form of ordnance survey which went literally everywhere; across the furniture, up the ceiling, down the walls, across the carpet. I could never get quite close enough to see the name on the map – it used to make me quite cross.

“Occasionally I see people walking in the street in front of me but they never turn around. I never see their faces, but they give me the impression by the way they’re dressed that they’re from the 18th century and that they’ve just come out of a factory or something.

“I see gardens along the side of the street that I haven’t seen for years with beautiful colours, but they aren’t there, and I can’t even see yellow now.

“I have had the odd feeling in a car if I’ve been a passenger and we’ve stopped, that I feel and see the car moving. I do sometimes feel a bit unsure because of deciding whether something is or isn’t there – you’re never 100 percent sure.

“Normally I don’t worry about it; I’ve never been frightened by it. To me, it’s part and parcel of losing my sight.

“In the group calls you can support each other. I said I would always be there if anybody wanted to have a word about Charles Bonnet Syndrome. I thought because of my attitude towards it and the way I deal with it that I might be able to make it slightly easier for others who may have been worried about their experiences.

“I think there should be more awareness about Charles Bonnet Syndrome, with people with sight loss made aware that they might get so that if and when it comes you’re not frightened. It would save people going through that unsure feeling of worrying ‘what’s the matter?’.

“On one of the calls, Judith Potts from Esme’s Umbrella gave us a talk. If I’d heard stories like that before, I wouldn’t have gone through that phase of thinking I’d got dementia.”

If you would like to speak to someone about Charles Bonnet Syndrome, Sight Scotland Veterans' sister charity, Sight Scotland, have a telephone support line offering expert advice and support to anyone impacted by sight loss. Call today on 0800 024 8973. 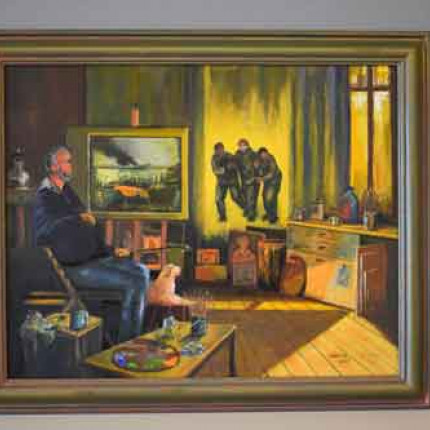