After Ingrid linked in with Age Scotland, seven veterans who regularly attended Sight Scotland Veterans’ monthly Inverurie lunch club are now catching up fortnightly since October with ‘Comradeship Circles’ calls together from the safety of home.

Age Scotland launched their Comradeship Circles service in July, offering older armed forces veterans opportunities to join group chats with each other by phone. Working together came naturally as both charities are members of Unforgotten Forces, a partnership focused on boosting health and wellbeing for older veterans.

RAF veteran Patrick Wire, 80, of Turriff, has sight condition macular degeneration and has been supported by Sight Scotland Veterans for two years. Patrick was an Inverurie lunch club regular before it was halted with lockdown in March. He has enjoyed reminiscing about his service days with his lunch club pals – the ‘Garioch Geezers’ – on their Comradeship Circles calls.

Patrick said: “We all attended Sight Scotland Veterans’ Inverurie lunch club and we made some quite good connections through it, so we are missing it. These calls are great and have helped to maintain our friendships. It’s so simple – they just give you a code to dial in and if you can’t manage it then they can ring you, which makes life a lot easier for some.

“You look forward to the call and it inspires you to think, which is good, otherwise you’d just sit and stare at the wall. As you get older you can’t get out – particularly right now – and my eyesight means I can’t get out on my electric scooter now.

“The majority of us in the group calls were in the RAF and we’ve found there’s a cross over between the camps we were on and people we knew. It’s fun to talk about your experience of being in the services.”

Dawn Nicolson, 87, of Huntly, started receiving support from Sight Scotland Veterans recently and has been been getting to know fellow veterans also supported by the charity through the calls.

Women’s Royal Naval Service (WRNS) veteran Dawn, who has the sight condition Retinitis Pigmentosa, said: “The calls are quite a good thing for people who may be a bit lonely, particularly these days. I think it’s an excellent idea because it gives you somebody to talk to and something to talk about. One doesn’t really realise how much you missed speaking to people. I think a fortnightly call is just right.”

Sight Scotland Veterans Outreach Worker, Ingrid Penny, said: “Many of the older veterans we support often tell us they have experienced loneliness due to the impact of their sight loss. As we are still unable to run our social activities, some people are feeling this social isolation even more acutely.

“Age Scotland’s Comradeship Circles service has been brilliant in helping some of our Aberdeenshire veterans to maintain vital social connections through these restrictions. It’s particularly beneficial for those whose visual impairment and/or lack of access to technology means virtual contact isn’t possible.

“Partnership working with other charities and organisations has been more important than ever as we continue to provide veterans with sight loss with emotional and practical support in any way we can in these unprecedented times.”

Age Scotland Comradeship Circles Coordinator, Rachel Connor, said: “It’s been a pleasure to help facilitate the Comradeships Circles calls for the Aberdeenshire Sight Scotland Veterans members. It’s brilliant to hear everyone asking after each other and having a laugh on the calls. These are a wonderful example of different organisations working together to be there for the people they support, and encouraging in such a challenging time.”

Unforgotten Forces is a partnership of leading charities working together to boost the health and wellbeing of all in Scotland age 65 and older who served one day or more with the British Armed Forces.  For more information visit www.unforgottenforces.scot 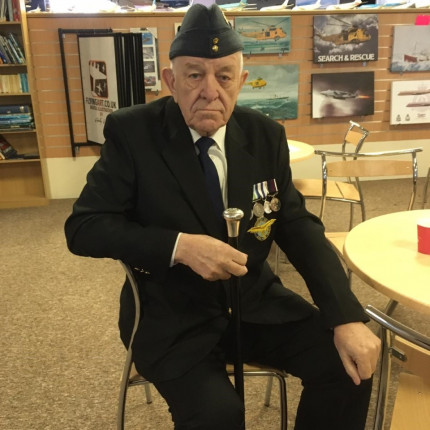