The party mood has been in full swing this month for Scottish War Blinded’s veterans with sight loss as members of the charity’s Arbroath and Dundee lunch groups celebrated the festive season.

Veterans from the area with visual impairment, who are all supported by Scottish War Blinded, enjoyed a tasty Christmas meal together with crackers, party hats and plenty of laughs.

The charity’s monthly meet ups are particularly important to the veterans at this time of year, helping to bring them out of social isolation – something which many members have struggled with as a result of their sight loss. 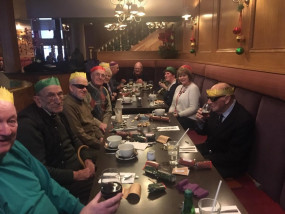 In fact, research carried out by Scottish War Blinded earlier this year showed that two thirds of Scottish War Blinded members said their sight loss had resulted in them experiencing loneliness, and access to the charity’s services played the greatest role in helping them overcome social isolation.

Outreach Worker for Dundee, Angus and Fife, Carole Martin, said: “The Christmas meal is really important because for some of our members it might be the only opportunity to have a Christmas party, so it’s great they can have a Christmas get together with their friends.

“If you’re on your own and suffering with a visual impairment, you might not get anyone at your door or friends coming over for a visit, so it’s lovely to have something to look forward to.”

The Arbroath group, run by Scottish War Blinded Outreach worker Carole Martin, meets on a monthly basis at the Coast Bar and Restaurant in Arbroath, and is currently attended by around 12 of the charity’s members.

With the Arbroath meet up celebrating on Wednesday, December 5, and Dundee’s group on December 7, some members even attended both events for a double dose of festive fun.

And Carole she has seen individuals attending the groups make huge progress in their confidence levels and their social lives as a result of the monthly meet ups.

Carole said: “I’ve seen big changes in a lot of the members. When they first came they were all strangers. Now they are all friends. They’ve swapped phone numbers, and they’ll meet up outside the meetings, joining other groups together.

“Some of them say they enjoy meeting once a month because they’ve got lots to catch up on. Before these groups they would be sitting in their house, hardly going out the door, and now this has opened the door for them for lots of activities as well.

“It makes a big difference that they are all veterans as well – they’ve all got that in common and their time in the forces is a subject they go back to.”

And Carole is encouraging any veteran with sight loss, no matter how or when they lost their sight, to reach out to Scottish War Blinded for free support.

Carole said: “There’s no need to be alone. Get in touch, we’ll put you in touch with other veterans as well. Come and be part of our community.”