An RAF veteran with sight loss who lost his wife last Christmas has bravely spoken out about living with loneliness, which he says is heighted by the festive and winter period.

After losing the majority of his vision to a haemorrhage and macular degeneration four years ago following an old eye injury, Norrie, who was originally supported through his sight loss by Sandra, says the winter months now leave him housebound. 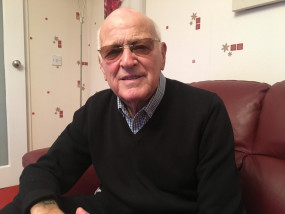 With no other family, Norrie has struggled with social isolation and depression since his beloved wife passed away, claiming it feels like many “don’t want to see people with disabilities”.

But the veteran says he has found companionship and support again since becoming a member of sight loss charity Scottish War Blinded in February this year.

Norrie, who served National Service with the RAF Regiment for three years as a gunner and driver, said: “Sandra was really good when I lost my sight. When we had an idea about what was going to happen, she used to have me walking around the house with my eyes shut.

“She passed away last Christmas. I still get quite upset about it. She was a very brave woman.

“I didn’t know what was happening. Depression is a thing that I was dealing with.

“Loneliness is part of my problem now. I find it hard living here without my wife being here.

“You’re not looking for attention at all but you find people don’t see or don’t want to see people with disabilities – a lot of people think you don’t exist. That at times can get annoying. In shops it’s hopeless, not many have the staff who can come and help me.

“Christmas and New Year, you want them over quickly. There are lots of things in my house that were Sandra’s. It’s the reflection at this time of year, that’s the terrible bit.

“I love all kinds of music, but I won’t listen to music at home anymore. It makes me too emotional.

“If I move somewhere else, that would have no memories at all. There’s no escaping it, the connection’s there all the time. It drives you nuts.

“Very fortunately for me, along came Scottish War Blinded.”

Since joining Scottish War Blinded, Norrie has attended the charity’s activity hub, the Hawkhead Centre in Paisley for veterans with sight loss.

Staff will pick him up and drop him home every Monday to enable him to attend the centre – and the veteran says he looks forward trying out new activities each week, from archery and group quizzes to cookery classes.

Norrie said: “The people are so easy to talk to. It’s like you’ve known them all your days.

“Everybody’s trying new things and you get a good laugh.

“I’ve been bowling – before that I’d never been bowling in my life. I’ve done archery too. You can’t see the target, but they talk you through it. There’s the sense of achievement when you hit the target.

“After Sandra died I was just by myself. I did no other activities. All I’d do was walk. Who’d have thought at 80 years old I’d be playing with a real bow and arrow?

“I can take the food I make home with me as well, that’s really nice.”

Norrie will spend Christmas on his own this year. But he says he knows he has support from the staff at Scottish War Blinded.

He said: “I’m very conscious of having to rely on other people if I’m out. But at the Hawkhead Centre everybody’s the same and has problems with their sight. Everybody needs help.

“Scottish War Blinded came round at the right time for me. The staff are so understanding. If you’ve got a problem they can help or put you in contact with someone in confidence regarding your problem, which is utterly brilliant because half the time, especially when you’re on your own, you’re having to figure these things out yourself.”

And Norrie says although the thought of going home alone after a day at the centre is always on his mind, he is “grateful” to have a support network through the charity.

Norrie said: “I could phone anybody at Scottish War Blinded and have a chat, it’s not just talking to them the day I’m in the centre.

“You need someone to express yourself to. It’s a life changer.”

Scottish War Blinded is working to raise awareness of the impact of social isolation on veterans living with sight loss.

Research carried out by the charity earlier this year showed that two thirds of Scottish War Blinded members said their sight loss had resulted in them experiencing loneliness, and access to the charity’s services played the greatest role in helping them overcome social isolation.