A veteran whose passion for cycling was halted for 20 years by his sight loss is finally back in the saddle thanks to Cycling UK and Scottish War Blinded.

Bryce Campbell, 84, who lives in Edinburgh, fell in love with bikes as a boy and took part in countless races and time trials, even pitching himself against Olympians in the 1970s.

But when the grandfather was diagnosed with Glaucoma 20 years ago he was forced to stop riding, and in the last five years his sight has deteriorated extensively – now completely blind in one eye. 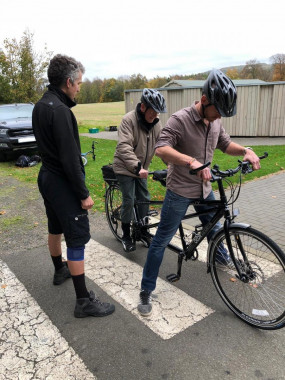 After also overcoming a life-threatening mystery illness three years ago, which at one point paralysed his vocal chords, the bubbly veteran has been having a ball trying out new activities at Scottish War Blinded’s Linburn Centre – the charity’s activity centre for veterans with sight loss in West Lothian.

And after learning about his cycling background, the Linburn Centre staff have worked together with Cycling UK’s tandem cycling club for people with vision impairments, VIE Velo, to help Bryce get pedalling again with use of a tandem bike.

Bryce, who was assigned to the Royal Army Pay Corps when he undertook National Service in 1962, said: “It was fantastic. It was like low-level flying – I’ve always likened cycling to that. There’s nothing like it.

“There was no fear, it all just came back naturally to me.

“I think I’ve been interested in bikes since I was two. I’ve always loved bikes.

“I think I took it up as more of a sport when I was about 14. I cycled more before my time in the army.

“You name it, I did it – time trials, road racing. I even raced against the Russian Olympic Team in the 1970s. That was when I was with the Velo Club Stella in Glasgow, a real racing club, and the club organised a race to give them some competition.

“I like to think I could have been a champion, but I wouldn’t train that hard because I just loved it too much. I was never that dedicated, I just loved cycling and competing.”

The VIE Velo team brought one of their tandem bikes to the Linburn Centre, and with Centre Officer James Gregson – also a keen cyclist – acting as pilot, while Bryce took position as stoker, and they were soon happily circling the activity hub’s grounds.

David Glover, Cycling UK’s Senior Development Officer for the Edinburgh All-ability Bike Centre and VIE Velo, said: “It was a huge pleasure to meet Bryce and help him to regain his passion for cycling. It was obvious from the moment he got on the tandem that he was a very experienced cyclist who required very little encouragement to get up to speed straight away.

“At Vie Velo we support people with visual impairments to discover the joys of tandem cycling – whether they are experienced cyclists or have never ridden before. We’d encourage anyone to give it a go!”

It was an incredible opportunity for Bryce to reconnect with his beloved sport and share his cycling tales with fellow veterans supported by Scottish War Blinded.

Recollecting when he faced Russian Olympians in 1972 as they toured Scotland in training, he said: “The Russians wanted a training run, so we went round the Five Lochs.

“I remember one of them wasn’t feeling all that great and I tailed off with him – the rest left us miles ahead. Eventually he began to feel better and we caught the others in sight. There were about 60 in the race all together but we were in the first 20, so that was pretty good.

“I’ll always remember, at George Square in Glasgow we were stood talking after the race, then all of a sudden this great big bear of a man, he looked like the Michelin Man, gave me this huge bear hug and kissed me full on the lips, saying ‘Tovarich’, thanking me for helping this guy in the race.

“Cycling was more popular in those days. Every town had a cycling club. Bikes were affordable then – between you and the professionals there wasn’t that much difference in the bikes. Now the guys in the Tour de France are riding £30,000 bikes.”

Bryce, who is married with three children and has two grandchildren, has experienced a new lease of life at the Linburn Centre after suffering a period of severe illness that baffled doctors.

Now taking on daring hobbies at the activity hub including archery, and even a white water rafting trip, there’s no stopping him.

“I had to stop cycling when my glaucoma hit me, about 20 years ago now. It’s only probably in around the last five years that it’s really gone to pot,” Bryce explained.

“Then three years ago I was ill. It began with having difficulty in swallowing, and even touching my hair was painful. I had all the symptoms of a severe brain tumour. To this day they don’t know what it was. I was in hospital for weeks and weeks, they threw every test in the book at me.

“My vocal chords were paralysed – I couldn’t eat or drink and I had to be fed by tube. They can’t believe how well I’ve recovered.

“At first I was very reluctant to come to the Linburn Centre. Dawn Smith, my Scottish War Blinded Outreach Worker, tried time and time again to get me to come along. Eventually I gave in. She took me along and I couldn’t believe it. I thought, ‘This’ll do!’

“It’s just been fantastic – I’ve even been white water rafting; it was absolutely fabulous.”

And with the roaring success of the tandem bike trial, the Linburn Centre are looking forward to hopefully bringing more of these cycling experiences to Scottish War Blinded members in 2019.

Bryce added: “I’d love it if we got one of those recumbent bikes – they’re fantastic!”

Rebecca Barr, Director of Scottish War Blinded, commented: “The staff at our Linburn Centre and our veterans alike have loved hearing about Bryce’s cycling adventures, and we’re so pleased we were able to work with Cycling UK to help him regain his love of the sport.

“Scottish War Blinded is focused on tailoring support to our members in ways most suited to them. Hobbies and interests are such a vital component of a person’s independence and identity, so we endeavour to find ways for our veterans to keep their passions going, despite their sight loss.”