Three of Scotland’s leading charities have combined forces to raise awareness among Scotland’s veterans of the need to act swiftly if they are having problems with their hearing or vision. Scotland's Veterans Commissioner has welcomed the collaboration by Scottish War Blinded, Age Scotland and Action on Hearing Loss Scotland, who have jointly called for action to raise awareness among veterans of the risks of losing their sight or hearing. 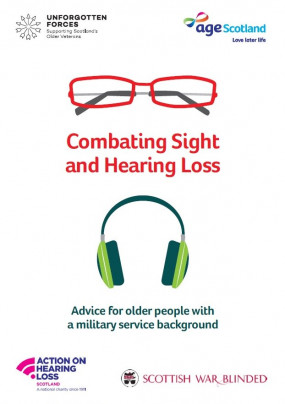 The charities have produced a Combating Sight and Hearing Loss guide advising where they can get help and support. Free copies of the guide can be requested from the Age Scotland Helpline 0800 12 44 222 and the guide is available online here.

With veterans at greater risk of developing sensory impairment, the charities are calling for screening for veterans to identify early those who are losing their hearing. They are also urging that people are asked if they have served in the forces when they are registering for a Certificate for Vision Impairment so that veterans be signposted to the right support.

Action on Hearing Loss Scotland’s Hearing Forces project, Age Scotland and Scottish War Blinded are members of the ‘Unforgotten Forces’ Consortium which is a partnership between 15 leading organisations led by Poppyscotland which is delivering a range of new and enhanced services to older veterans.

“As one gets older, so it becomes more challenging to keep abreast of changes and feel comfortable as one’s own needs change.  This practical guide for older veterans who are living with sensory loss, primarily sight and hearing, details in clear concise language the advice and support available.

“I am sure it will prove to be a welcome addition to the information already available to those living with these conditions and to the health professionals and family members supporting them.”

“Older veterans with sight and hearing loss often miss out on a wealth of support available to them, either because they are unaware it is available, or because they don’t realise they count as a veteran.  Anyone aged 65 years and older who has done and received pay for at least one day’s service in the UK Armed Forces is classed as an older veteran, including national servicemen, reservists and merchant navy who have supported a military operation.   It’s a privilege to work with our partners to ensure older veterans with sight and hearing loss know about and can get the help when they need it.”

“It is vital that veterans who are concerned about their sight have it checked as soon as possible, so that they can access the support available to them.  We support over a thousand veterans with sight loss across Scotland, helping them develop skills to live independently and providing a network of support and activities which helps prevent them from becoming isolated.”

“People on average take up to 10 years before getting their hearing tested from the point they first notice hearing difficulties. Through our Hearing Forces service, we are supporting older veterans to benefit from using hearing aids, which are most effective when fitted as soon as hearing loss is diagnosed. As the Scottish Government recognises the need for ‘early diagnosis and intervention’ assisted by screening in its See Hear sensory impairment strategy, we want older veterans to be screened for hearing loss so they can access the person-centred support they need to reduce the impact of deafness in their everyday lives