Blind snowboarding: veteran blinded in Iraq takes to the slopes

This article was first published in January 2019 when Sight Scotland Veterans was known as Scottish War Blinded.

A blind veteran who had both his eyes removed after he was injured during operations in Iraq is training to hit the world stage in competitive snowboarding.

Ben Shaw, 36, from Dalkeith, has been totally blind since he was injured by a roadside bomb on his second tour of Iraq with his battalion, 3 Rifles, on February 25, 2007.

For 10 years following his life-changing injury, Ben, who has been a talented snowboarder since he was boy, gave up his favourite sport – initially thinking he couldn’t board without sight.

The married dad-of-two has been supported by Scottish War Blinded since 2007, and has taken part in activities at the charity’s Linburn Centre in West Lothian, while receiving cane and route training, and independent living skills training with the Scottish War Blinded rehabilitation team, as well as support from Outreach Worker for Midlothian, Dawn Smith. 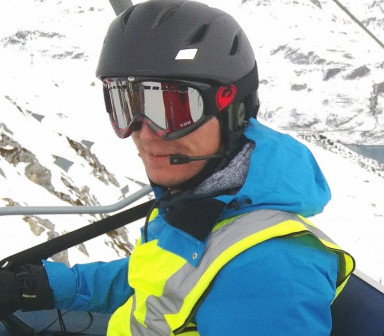 Growing in confidence by applying a military mindset to overcome the challenges of living with no sight, Ben even took part in a Ferrari driving experience at Knockhill race track through Scottish War Blinded in 2008.

As the urge to get back on the snow prevailed, Ben joined the Armed Forces Para-Snow Team (AFPST) last year, and has demonstrated incredible ability back on the board, progressing rapidly in training.

And he’s just embarked on an exciting season of competition in his beloved sport, with his ultimate goal to reach the 2022 Winter Paralympics in Beijing.

How Ben got into snowboarding

Ben said: “I started snowboarding when I was around 10, but I was skiing from when I was three.

“With my dad being in the forces, one of his jobs was in Germany, and it was right next to the Zugspitze. When me and my mum used to go over we used to go skiing.

“I took to it really quickly. I’ll always remember, when my dad was teaching me to ski, I’d see people on skis and just think it was easy.

“As I got older, snowboarding just looked so much better. I took to it, big style. When I turned 17, my mum and dad bought a chalet in Morzine, France. I moved over with them for around two years, so I was pretty much snowboarding every day, throwing myself over ridiculous jumps.

“When I joined the army in 2002, whenever time allowed I would go over there. I’d been set to go on one of the selection courses for the army’s winter snow sports team once I got back from Iraq, but then I was injured.”

Ben first tried to get back on the slopes over in Morzine just months after losing his sight. However, it was a step too soon in his recovery, as, he explains, his brain had not yet adapted to coping without eyesight.

“I hadn’t tried it again under the ideal circumstances at all, but I hadn’t realised that at the time,” he said.

“My brain hadn’t settled down and got used to the fact it no longer had vision. When you lose your sight, things go completely off keel.

“Your balance, coordination, orientation, special awareness – you don’t have a grasp on those. That’s only something that comes with time and practice.

“I was quite factual about it. I just thought it was an unfortunate casualty of being injured in the forces. It was one of those things I’d have to box up and think it was good while it lasted.

“I thought, I’m not going to be able to do what I used to do, like go over jumps. If I can’t do that then I don’t want to do it at all. I resigned to the fact I wasn’t doing it anymore.

“As time went by, the want to get back on the snow increased, and I wasn’t worried about not being able to do jumps.”

Ben got in touch with the AFPST, and after initial training in England and selection training in Austria in October 2018, the veteran has joined AFPST’s performance team.

Training one-on-one with his coach, Ben has adapted to utilise sound as his guide down the slopes – even beating snowboarders with sight in his event, timed slalom.

Ben said: “I was learning to do it all a different way, so I had to slow it all down. When you lose your sight, trust is a big thing. I find the military sphere helps with that.

“When Jim, my coach, boards ahead of me I can hear his board on the ice and immediately have a point for my direction. We have an earpiece speaker system, but I was finding it was holding me back because it was muffling my peripheral sound.

“So when we were in Austria Jim bought one of those Alpine cow bells – it was a really small village, that was the only thing he could find. I followed the sound of that and things just ridiculously accelerated from there.

“As you’re boarding there are mental barriers you hit and you feel really uncomfortable. There are moments when I’m following the bell, then a moment of sanity where I think, ‘I’m attached to a snow board on a mountain on top of a glacier, following the sound of a cow bell and travelling at 30 mph?!’ You just have to keep going.

This January, Ben has been taking part in the Royal Navy Alpine Championships in Tignes, before heading to Morzine for training, then Meribel for just over a week for the Inter Services Snowsport Championships. In March, he’ll hit the Army Championships, and the British Championships in Switzerland.

He’ll even be competing against able-bodied snowboarders who are currently serving in the forces.

“It’s giving us a hard goal to push against,” Ben said.

'Snowboarding is about regaining life'

And with his long-term goal to reach the 2022 Winter Paralympics, Ben says his family, including wife Louise, his son, aged four, and two-year-old daughter, are very proud of what he’s achieving.

Ben said: “My kids love that I snowboard. It’s really good because with disabled people as a whole there’s an emphasis on regaining independence, but also I think particularly with sight loss, if it’s quite sudden and dramatic, you’re basically regaining your life.

“I think even more so when you’re in the forces – you go from being extremely independent to being dependent and it’s ultra-difficult.

“You go through the recovery, but I don’t class snowboarding as that, I class it as regaining life. It’s a big one for me. My wife always says I could snowboard better than I could walk!”