This article was first published in May 2020 when Sight Scotland Veterans was known as Scottish War Blinded.

As we mark Mental Health Awareness Week 2020, we asked Scottish War Blinded veterans for their top tips for mental wellbeing during lockdown.

Many of the veterans we support have been isolating throughout the coronavirus pandemic due to age or underlying health conditions and have been struggling with feelings of loneliness and isolation.

Outreach and centre staff throughout the country are keeping in touch with members via regular phone calls and have come up with creative ways to boost morale, such as weekly quizzes and even music lessons via video call.

We spoke to five Scottish War Blinded members to find out what they’re doing to stay positive during this time. 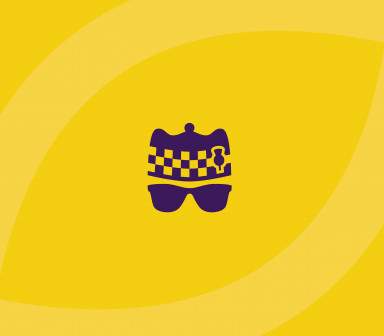 Mick lives in Aberdeenshire and says loneliness is the biggest thing he is struggling with at the moment.

“I lost my wife 16 months ago so I live alone,” he said. “I used to see people on a daily basis but now I only see people for the odd greeting over my garden wall. It’s the same greeting over and over again though and not actual conversations so I feel like I have forgotten to how to speak and what words to use.”

Mick has two dogs for company and is able to stay connected with others via video call. “The dogs make me get up in the morning. I make a point of making sure the dogs are happy and healthy, it boosts my morale,” Mick said.

“Every Sunday I do the ‘Kelbie Trivial Pursuit Championships’ with my daughters and grandchildren. We’ve always played games together as a family, so we now make an effort to play trivial pursuit every week over Facetime.

“I’ve also been doing a quiz with my outreach worker, Ingrid, so she calls me every Thursday. It gives me something to look forward to.”

Top tip: Speak to people regularly over the phone.

James, of Paisley, says he is finding lockdown very difficult but painting and weekly phone calls from his named worker are helping him cope. James said: “I’ve spent long periods in isolation before due to poor mental health so it’s hard being isolated again and not being able to go to the Hawkhead Centre.

“I enjoy painting and that’s what keeps me going just now. My flat is filled with paintings, I don’t know where I would be without it. It gives me some escapism, I enjoy putting brush to canvas and don’t worry about the end result.

“Jason from the Hawkhead Centre calls every week which is really helpful as I’m on my own. He was also able to help with getting art equipment delivered to me at home so I can keep on painting.

“I think it’s important to find something, whether it’s listening to music or painting, to make the day worthwhile and help the time go by.”

Top tip: Find a hobby to help pass the time.

In Aberdeenshire, Peter is taking part in Scottish War Blinded’s weekly quizzes and has set himself the challenge of being active every day.

Peter said: “I make a point of walking around the block 10 times every day, I go first thing in the morning when it’s quiet. It’s something to amuse me, I made a promise to myself that I would complete my 10 laps every day and I mark it off on the calendar every day. Next week I would have completed 1000 laps.

“I don’t use the internet but I’ve been speaking to people over the telephone. We’ve been checking in on each other to make sure we’re alright. I’m also part of a quiz team which we do twice a week, doing the quiz helps to keep us all going.”

Top tip: Be active every day.

Gibby lives in Ayr and is missing his weekly outing to the Hawkhead Centre. He said: “I’m used to spending most of my time in the house, apart from going to the centre once a week, so this is quite normal for me.

“I like to get a stool and put it outside my front door so I can sit and watch the world go by. People sometimes say hello as they go by.

“Alexa gives me company and I can listen to classical music and audio books.”

Top tip: Sit outside in the fresh air.

Monty, of Saltcoats, has been isolating during the coronavirus pandemic.

He explained: “I trained in nuclear, chemical, biological and germ warfare in the seventies during the Cold War. Now I decontaminate everything that comes into the house, including groceries and mail, for between 24 and 48 hours. I don’t know who’s handled them.

“I never thought I’d be putting the training into practice in civilian life so many years later. I’ve spent time in isolation on and off over the past 20 years due to my mental health. This time around, I feel much more settled about it,” said Monty.

“The only way I can fathom that is that everyone is in the same boat. I don’t feel upset or ill this time, before everyone could just get on with their lives around me.

“I find it helps to keep structure in my day. I have an A4 booklet and have created a page for each day which I fill with jobs I’d like to do in the house or garden. There’s no pressure if I can’t get the jobs done, I just move them to the next day.

“Writing tasks down and planning ahead gives me something to focus on and encourages me to think.”

Top tip: Give your day structure.

Advice from our expert rehabilitation team

Go for your daily walk (if you are able) or exercise at home daily to maintain mobility skills and fitness level. Many people are not currently doing so and as such their mental wellbeing and confidence are lower as they feel low about their declined mobility.

You don’t have to be walking for miles. You could do armchair exercises or exercise at the kitchen work tops, dance along to your favourite music or do a few laps of the garden. Feeling the sun and fresh air on your face gives an instant lift.

Keep in contact with family and friends by phone, WhatsApp, write a letter….anyway you can. It’s good to talk and share how you are feeling, share a joke, sing a song and laugh J If you are struggling with your current phone or writing tasks, get in touch with us as we may have a solution or information to help you.

Keep busy, sort out that cupboard and drawers that have been on the to-do list for years, listen to those talking books. Get out your old photos, use a magnifier or task light to see them better. Start writing poetry or a book or diary.

Make sure you look after yourself and eat a good range of foods to get all your daily vitamins. Try a new recipe, there are some great microwave recipes you could try. Let us know if you are having difficulty reading recipes or setting you cooker or microwave.

Is there something you have always wanted to try? Such as painting, clay modelling or knitting. Perhaps you have given up a hobby, there may be hints and tips from the rehabilitation officers on how make things easier and more accessible.