This article was first published in 2019 when Sight Scotland Veterans was known as Scottish War Blinded.

A Dundonald veteran living with a visual impairment and eye protrusion after developing Grave’s Disease has told how sight loss charity Scottish War Blinded has ‘given his life meaning again’.

The autoimmune condition caused the army veteran’s eyes to permanently bulge and has resulted in him having to cope with constant double vision.

Conscious of how his eyes appeared to strangers, for years Tony tried to hide his eyes with dark glasses to avoid drawing attention to them and attracting comments.

But since he began to attend Scottish War Blinded’s Hawkhead Centre in Paisley just over a year ago – the charity’s activity hub which supports veterans with sight loss – Tony’s confidence has blossomed.

He’s now ditched the dark glasses all together and is using his self-taught guitar skills and song-writing talents to entertain fellow veterans with sight loss in a music group each Wednesday at the centre.

Tony, who served in the forces for five-and-a-half years from 1974 to 1980, said: “I just woke up one day with my eyes protruding about an inch from my head. One was looking up and one was looking down.

“I was studying computing at the time and working night shift security to help pay my way through college. When two or three people said, ‘Tony, what’s wrong with your eyes?’ I thought I was just tired.

“It’s very disorientating having double vision. It took a bit of adapting to. To this day I have no depth perception. I can’t see steps or stairs.”

“The bit that gets me is young children staring at you. They know there’s something wrong with you but they don’t understand.

“I tried patches. I didn’t like scaring kids so I took to wearing dark glasses but that makes my vision even worse and I’m more likely to bump into people. So I just have to put up with the fact that people stare.

“Before Scottish War Blinded, my life was stagnating. I wasn’t going anywhere. I had no great interest in life.”

The veteran takes a bus to Irvine each Wednesday, where Scottish War Blinded staff run a pick-up service to and from the Hawkhead Centre for members in the area.

Tony said: “The visits to Hawkhead give me a reason to exist and something to look forward to every week.

“Before then I didn’t have anything to do. My life was full of appointments with doctors. That was the only time I went out of the house.

“I would suggest getting in touch with Scottish War Blinded to anyone who has a family member who is a veteran and suffers with sight loss.”

And Tony says he has enjoyed “giving something back” to the community by playing music for his fellow veterans, having built up the courage to play in front of others in a group.

Tony said: “The difficulties I’ve had have been more than made up for by organisations like Scottish War Blinded.

“When something like this happens, you feel you become a bit of a burden because you need somebody to help you with things. I thought, with my music it’s a way I can give something back. I enjoy playing for the others – I get the sense of companionship from the group every time.” 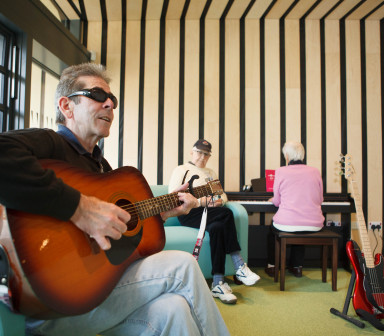